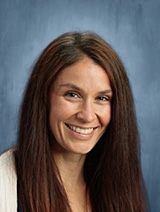 Kristen Kwiatkowski holds a BS from Eastern Michigan University, where she graduated Cum Laude in the field of Exercise Science. She also holds two RYT (registered yoga teacher) certifications. Kristen is extremely passionate about movement and all of the numerous benefits it has on the body. She has studied at length, the specific benefits of movement and brain function especially during the beginning stages of life. She truly believes in the core values of Montessori in all of its aspects. The “freedom to move” and the “freedom to choose” are two she feels a great affinity for. She loves how the Montessori environment allows the brain to develop into its full potential.

Kristen has two children that have been attending Meadow Montessori since 2015, which is the same year she became part of the staff.

She, her husband, and their children love spending their time at the beach, playing or watching sports, practicing yoga, dancing, listening to music, singing, playing games, cooking, and creating.

Kristen can be reached at kkwiatkowski@meadowmontessori.org.