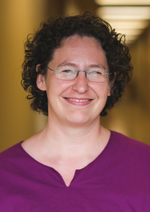 Born in Michigan, Holly was part of a military family. She started her education at South Pacific Academy in American Samoa and continued school in many places, including Kentucky, Wisconsin, Michigan, and Ohio. Her varied experiences in her own education led her to many interests, including music, Classical and Ecclesiastical Latin, and education.

Holly earned a degree in Music Performance and Pedagogy (oboe, English horn, pipe organ) at Alverno College in Milwaukee. A significant focus of her studies was the education of children, particularly in music. She studied for a time in Chester, England and taught students abroad. Music and education have not been her only interests. She was awarded a Master of Library and Information Science degree from University of Wisconsin Milwaukee and worked in various academic libraries, helping students conduct research and tending computer databases.

Holly moved with her family to Monroe in 2003. She has worked with MMS students since 2010, teaching a variety of subjects, including music, Latin, and English as a Second Language.

In addition to her many pets, Holly also enjoys photography, science fiction, and visiting all sorts of museums. And figuring that no one is too old to learn, she is currently learning to play the cello. She enjoys seeing her daughter Lucy thrive as a student at MMS.

Holly Morse can be reached at hmorse@meadowmontessori.org.