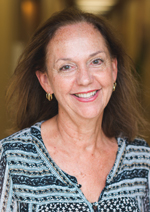 Catharine Calder founded Meadow Montessori School in 1984, but to this day, she claims that her “fall” into the world of independent school administration was unintentional, whereas her “climb” into the world of teaching, thinking, and sharing with fellow human beings is on-going and intentional.

After earning an undergraduate degree in political science and Chinese Area Studies, Cathé traveled to Taiwan to continue her study of Chinese language. At the end of her three-month course work, she stayed on in Taiwan for an additional year, studying Chinese and teaching English, before leaving to spend another six months traveling throughout Asia. She returned home for a brief visit only to find herself married and with two (step)children within six months.

Back home in Michigan, Cathé entered graduate school at the University of Michigan and earned a degree in Chinese Area Studies, while working as a graduate assistant and lecturer in the Women’s Studies Department. For several years, she taught at courses at the university level.

After the birth of her second son (the fourth child in the family), Cathé began volunteering at a small Montessori school in Monroe. The administrator urged Cathé to become a trained Montessori teacher. Once Cathé learned that this training was available in Europe, she packed up her three youngest children and headed for Bergamo, Italy. The experience of living in Europe only barely takes second place to the wonderful training she received.

Upon returning to the United States in 1983, Cathé discovered that the local Montessori school was going to close its doors in June 1984, so it was obvious that Meadow Montessori School was ready to be born. MMS opened its doors in the fall of 1984 to twenty-three students.

Cathé continues to teach and administrate, knowing that teaching is the more important of the two tasks. She shares her love of all things Chinese with her students, along with her love of writing, gardening, knitting, art, music and the outdoors. But in turn, she looks forward each and every day with what her students will share and teach her.

Catharine Calder can be reached at ccalder@meadowmontessori.org.